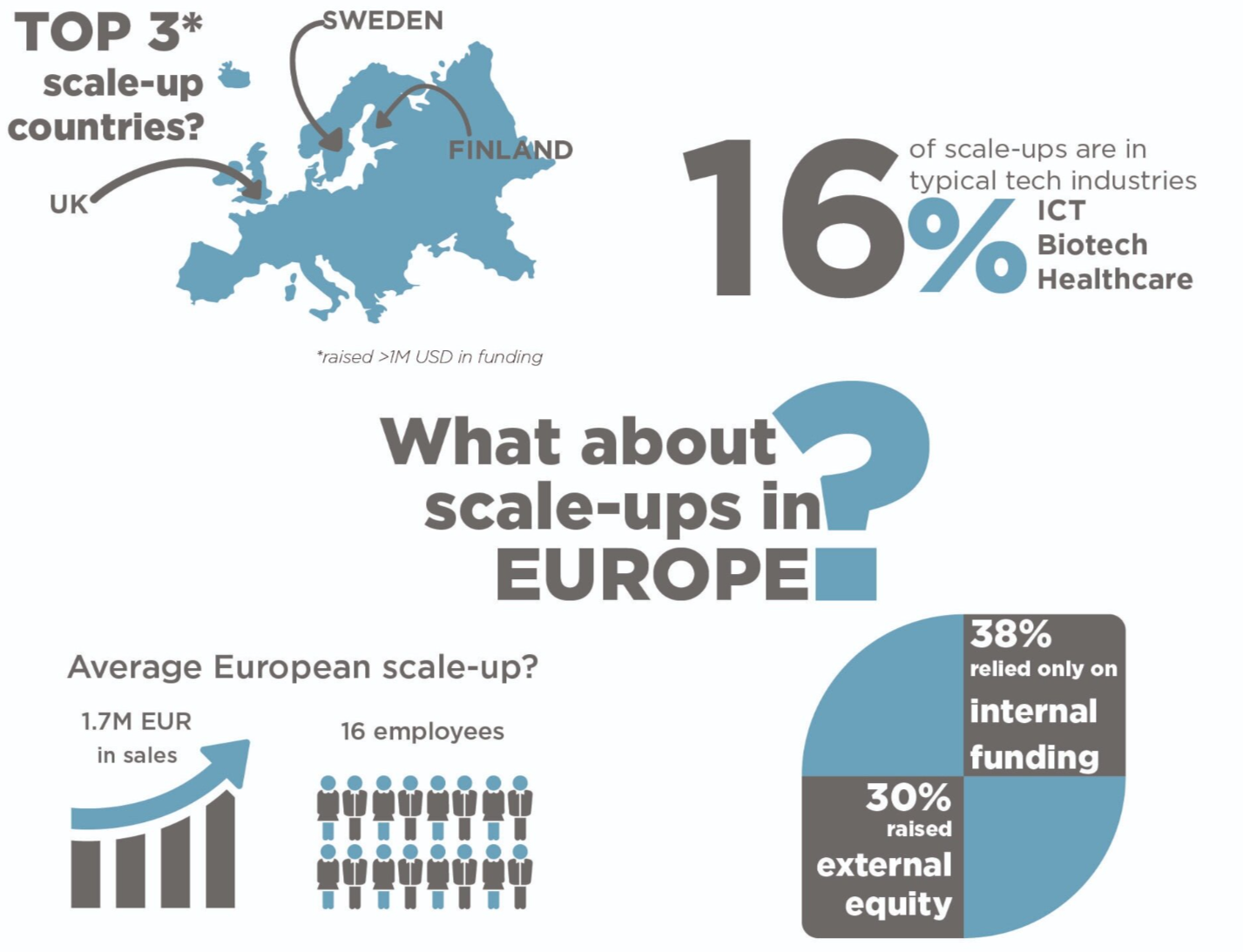 Unique view of the landscape and management of European scale-ups

The widely held belief that European scale-ups are mainly innovative tech companies is incorrect; they can be found in all sectors and at all levels of innovation. However we can identify major differences between sectors in terms of size and growth, with scale-ups that are active in IT and consumer goods and services leading the way. Scale-ups with external investors on board are more professionally managed and have made greater progress in terms of internationalisation, innovation and talent management. All the same, attracting additional funding proves very difficult and hampers their further growth ambitions.

These are some of the conclusions of a large-scale study conducted by Vlerick Business School on behalf of Scale-Ups.eu. Professor Veroniek Collewaert, Professor Sophie Manigart and post-doctoral researcher Thomas Standaert used information about more than 80,000 scale-ups in 8 European countries as their starting point. They specifically investigated management practices by means of a targeted survey among 124 of these scale-ups.

The myth of innovative tech companies

The traditional image of scale-ups as high-tech companies is incorrect. Only 1 in 10 European scale-ups are active in the IT sector and only 4% in biotech or healthcare. In addition, only 1 in 4 scale-ups indicate that they have created a product or service that is new on a global scale; around 1 in 3 even state that they have nothing new at all. On average, therefore, scale-ups are not as innovative as is generally assumed. Scale-ups that are active in IT and biotech or healthcare are ahead of the rest.

The average European scale-up generated around 1.7 million euros in sales in 2017, 30% higher than the previous year. The growth was higher (38%) among European scale-ups active in the fields of consumer goods and services. This is mainly due to the exponential increase in B2C e-commerce companies (e.g. Zalando, ShowroomPrivé or Just Eat). IT scale-ups come second, followed by transport companies. These sectors are also doing better in terms of employment. In terms of aspirations for the future, it is mainly IT and biotech/healthcare companies that intend to continue along the same growth path.

Merely having the ambition to grow is not enough. The Scale-Ups.eu report shows that scale-ups identify 5 major challenges that they struggle with when it comes to further growth. Across all five challenges, external financing makes a big difference: scale-ups that already have external investors on board are much more professional than those that rely mainly on their own resources.

Jürgen Ingels, founder of Scale-Ups.eu: “External financing is an important factor for increasing professionalism and growth. However, precisely this proves one of the biggest challenges for scale-ups. High-quality networking and matchmaking are therefore extremely important. The Scale-Ups.eu report shows the need for time squeezing and also the reason for our organisation's existence. If you aim to grow, seek out relevant investors and go for smart money. Let them pave the way to your success.”

1 in 3 scale-ups regard finding and keeping employees as their number one challenge when it comes to further growth. However, scale-ups have not yet made much progress in the area of professionalising their HR departments:

It is mainly scale-ups with external funding that are much further ahead in terms of HR and would also benefit greatly from the development of a professional HR policy.

Finding sufficient financing is the main challenge for almost 1 in 3 scale-ups. However, it is interesting to note that it is primarily scale-ups that have already raised external equity financing that identify financing as their main challenge. This points to the existence of a scale-up gap in Europe: scale-ups manage to find smaller, early-stage amounts, but once they have to switch to larger follow-on rounds, many still struggle to get this financing off the ground.

An important conclusion from the report is that external investors assume a catalytic function for international growth. In addition, only 1 in 3 scale-ups have considered a possible exit strategy when the company is ready for it. The most common scenario for this is the takeover of the scale-up by another company.

The addition and replacement of entrepreneurial team members and the advice of independent directors has a beneficial impact on the sustainable growth of the scale-ups as a result of the increase in human capital.

Although this was identified by the scale-ups as the least important challenge, we can also see many opportunities for further professionalisation here:

Investments in this area can help scale-ups to cope with the increasing complexity of their businesses.

Veroniek Collewaert, Professor of Entrepreneurship at Vlerick Business School: “In general, our research succeeded in both debunking and confirming a number of common views on scale-ups. They are not all innovative tech companies. Not all of them have raised external financing. However, scale-ups that do have external financing tend to be much more ambitious and professional in terms of their approach, whether it involves recruitment, sales, governance or IT infrastructure.”

About the European Scale-up Report by Scale-Ups.eu

The study analyses data from 80,451 scale-ups in 8 European countries (Denmark, Finland, France, Germany, Luxembourg, the Netherlands, Sweden and the UK). The scale-ups were all founded between 2007 and 2013. In order to qualify as a scale-up, the company in question must have raised at least $1 million from investors since its inception or must have experienced an average annual growth in sales or employment of at least 20% per year over a period of 3 years.

In addition, 124 of these scale-ups were also questioned about their management practices between February and June 2019. The scale-ups in the sample averaged 8.5 years old, had 21.4 full-time employees and generated annual sales of 2.5 million euros.

The study was conducted by Veroniek Collewaert (Professor of Entrepreneurship), Sophie Manigart (Professor of Finance) and Dr. Thomas Standaert (researcher) at Vlerick Business School, on behalf of Scale-Ups.eu.

No items found.
Back to the news